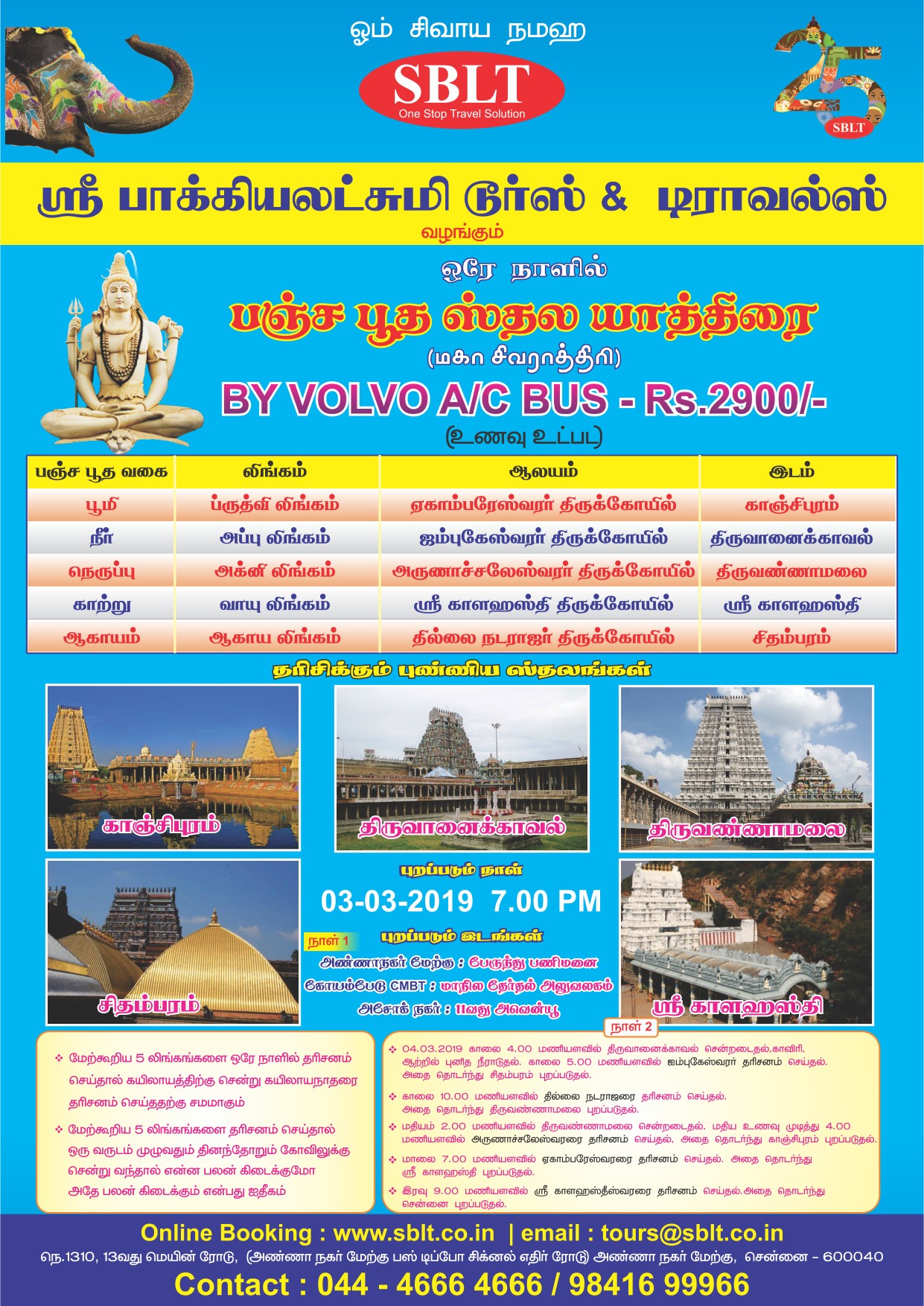 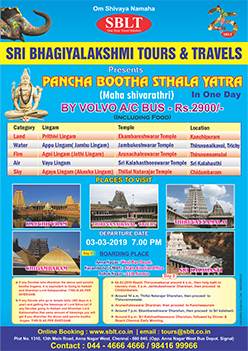 Pancha Bhoota Temples Tour – A Mukthi Yatra:
The Pancha Bhoota Sthalam refers to the five Shiva temples dedicated to Lord Shiva, each representing the manifestation of the five prime elements of nature- land, water, air, sky, fire. “Pancha” is denoted as “Five Sounds”, “Bhoota” means as “Element Sources” and “Stala” is indicated as “Temple Places”. All these temples are located in South India with four of these temples in Tamil Nadu and one is present in Andhra Pradesh. The five elements are believed to be enshrined in the five lingams and each of the lingams representing Shiva in
the shrine has five distinct names based on the elements they represent.

Initially, We started our journey from Thiruvanaikaval, Trichy around early morning 4 AM on 04.03.2019. Thiruvanaikaval is a small village, 3 km away from Trichy in South India, on the banks of River Cauvery. The directing divinity of this shrine is Lord Jambukeshwar and Goddess Akhilandeshwari. The sound produced for this Shiva lingam is denoted as “Ma”. One can see water oozing out of the linga in this shrine and hence the name “Appu linga or Lingam of water” is famous for this temple. Being one of Panchabhootha sthala this shrine is called as “Appu Sthalam” and also called as “Ubadesha Sthala” as the shrines of Lord Shiva and Parvati are seen facing each other. The Goddess herself accepted initiation into global truths from Lord Shiva in this sacred place, like a student from a revered Guru.

Around 10 AM, We visit the temple in Chidambaram has the famous Saivaite dedicated to Lord Shiva in the form of Nataraja. Nataraja is seen in the famous anandha tandavam position, the dance of creation. The governing divinity of this temple is Nataraja with his consort Sivagami. Shiva is worshipped as space or ether known as “Akasa Lingam”. The sound produced for this Shiva lingam is denoted as “Ya”. The renowned Saivaite saint poets Appar, Sundarar, and Sambandar have sung hymns in the glory of the lord for this temple is Nataraja.

Lord Shiva demonstrated as a column of fire in Tiruvannamalai to instruct lessons to Vishnu and Brahma. He also took in the form of Ardhanarishwara in this holy shrine. Lord Shiva in this temple is known as “Jothi Lingam”. The sound produced for this Shiva lingam is denoted as “Shi”. The entire mountain is a linga, the indication of Lord Shiva in the form of the element fire in Tiruvannamalai. Annamalaiyar worship is devoted to Lord Shiva, placed at the bottom of the Annamalai hill in Thiruvannamalai City. Saivite writers like Appar, Sambandar, Sekkizhar, and Arunagirinathar have chanted in praise of the Lord Shivan.

This famous temple in Kanchipuram is one of the five major Shiva temples or Pancha Bootha Sthalams representing the element of an “Earth”. Lord Shiva in this holy shrine is known as “Prithvi Lingam”. The sound produced for this Shiva lingam is denoted as “Na”. Goddess Parvati admires Lord Shiva under a mango tree, in the form of linga made with earth or Prithvi to reconcile with him. This ancient temple has been come into existence even prior to 600 AD and has been chanted by the revered Saivite Saints like Sundaramoorthy Nayanar, who attain his lost eyesight (left) after admire the lord of this temple.

This temple is located in the state of Andhra Pradesh on the banks of River Swarnamukhi. It is called “Dakshina Kailasam”. It is said that Lord Brahma afford prayers to Shiva and bathed in this river to get rid of “Sisuhathya patakam”, the crime of killing children. The Lord in this holy shrine is referred to as “Vayu sthala or the Air lingam”. The sound produced for this Shiva lingam is denoted as “Va”. In this temple, where Lord Shiva present with five faces convey the five elements – earth, water, fire, sky, and air. Saints have affirmed that purely one visit to this shrine is acceptable for an eager devotee to gain salvation and free himself from the sins of past lives. All the destructive effects induce due to the two artful planets Rahu and Ketu in a person’s horoscope, are mitigated when prayers are afforded in this temple. Another delightful aspect of this temple is that Lord Shiva exhibit in himself all the 8 planets excepting Saturn.

After visiting all the five places, Devotees will complete the dinner and reach Chennai early morning on 05.03.2019.

Benefits of this Journey: